I made this video is to demonstrate the labor intensive process of making curly copper pieces.  Roz and I are always looking to improve the energetic qualities of the Orgonite pieces we sell.  I set out to make these curly copper pieces as close as I can to the curl of the Golden Ratio. I think that Orgone, Chi, Qi, Prana and Life Force energy are different names for the same thing. This is the background energy field that permeates the fabric of our reality, from which everything is created. This energy naturally flows along in swirls, and spirals in all directions, continuously. Therefore, it is a natural tendency for this energy to flow along these curly copper pieces. 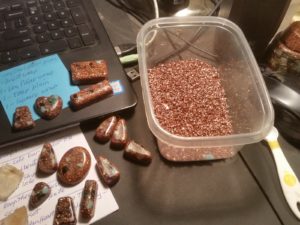 We buy all of our metal supplies from a local metal recycling company in Cottonwood Arizona. That is where I purchased the #4 gauge solid copper wire used in the video. It takes me about 6 hours to make 9.8 ounces of curly copper. If I had the budget, I would buy several large copper ingots from Alibaba.com and have them delivered to a local machine shop. There the shop would use a CNC machine to whittle it down to get a large amount of curly copper pieces. Until then, this is the method that I’m using to make the curly copper we use in the personal pieces we make and sell on this website.

Note: the product images have not been updated with the curly copper.

This first segment is a video in which Randy Powell talks about Vortex Based Mathematics and its ability to relate to everything in this Universe. You’ll see that the model he demonstrates can be used to express everything from our DNA to the Milkyway Galaxy and beyond. My personal interest is how this Torus / Vortex effect is exactly how I understand a Piezoelectric fields to operate, which is the same as our Aura field.. and apparently is how our / this Universe works as well . Fascinating stuff.

Go to YouTube and use the search term “Vortex Based Mathematics” and checkout what comes up. This in my honest opinion, is how our Universe operates, which is in direct contradiction to how the “powers that were” would have us believe it to be.

Bravo to Randy Powell and Marco Rodin for opting to “open source” this technology for the benefit of Mankind and Mother Earth, versus selling it to a mega corporation for the benefit of a few wealthy and tyrannical psychopaths, who would shelve it.

This next image was found on www.2012portal.blogspot.com and demonstrates this Vortex / Torus / Toroid effect in the above video.

The Piezo-electric fields is what is created when catalyzed resin shrinks on the Quartz Crystals in every piece of Orgonite I make. By wearing Orgonite, or by placing tower busters around your home, property and vehicle, you’re raising the vibration / energy field which transmutes / neutralizes lower frequency vibrations like those emitting from cellphones, cellphone towers, and every electrical cable, appliance etc and effectively shielding you and your loved ones from their harmful effects.

For those people who are highly sensitive to energies associated with higher density population area’s, Orgonite effectively shields / neutralizes those irritating frequencies, allowing for long, calm and pleasant stays in that environment.

Orgonite works effectively the same way to neutralize highly energetic people who have a tendency to throw their negative Chi around. Wear an Orgonite piece on your person to be less effected by their energetic blasts or gift them an Orgonite plain piece and stick it to their cellphone. Observe the results. You’ll be amazed.

Orgonite works well with agitated pets. Place an Small Pillar on your dogs collar and you’ll notice the difference.
Our dog Rudy loves his small pillar keyring art piece. Tower Busters in the 4 corners of your animals stall or barn will reduce anxiety amongst those animals inside the Orgonite envelope or those in close proximity.

My experience with a highly sensitive client (added June 22, 2017)

Connie (not her real name) suffers from various ailments which have left her highly sensitive to electromagnetic frequencies, among other issues. At one point she could not be anywhere near area’s with electric power lines. She spent a great deal of time out in the wilderness, just to escape the effects of EMF and to get a good nights sleep.

Connie’s condition was being revealed to me over a series of 1 hour detox foot baths. At one point she mentioned feeling fuzzy headed and having brain fog. In that moment it dawned on me to have her try on a small Orgonite pendant. Connie had previously mentioned that Orgonite didn’t work for her.

I left the room and picked out a small trapezoid Orgonite pendant off the display rack. I said maybe this will help as I placed in over her head and around her neck. At the same time, she stated that her brain fog was gone. For a few moments she was in disbelief. She then took it off.. and put it back on, each time feeling the brain fog disappear. When she finally embraced the fact that the pendant was helping her, she was elated!

Since then Connie told me she wears the pendant almost continuously. The only time she takes it off is for showering and when she’s sleeping. She said that she would wear it to bed, but was afraid her kitty’s would chew the tether.

It was wonderful for Rozlyn and I to receive the positive feedback.

We have a 30 Day Money Back Guarantee. You have nothing to lose and everything to gain.

Other topics of Interest:

Note from Ed ~ Ken Rohla does a wonderful presentation on practical ways to eliminate radiation from our bodies, environment, property etc. Ken talks specifically about Orgonite at 1:04:00.

http://freshandalive.com
Note: opposing viewpoints are welcome, rude comments will be deleted before posting.
Fresh And Alive founder Ken Rohla tells how to protect yourself and your environment from the heavy metals and radioactive nuclides in the atmosphere encircling the globe from nuclear accidents like Chernobyl, Fukushima, over 2,000 nuclear bomb tests, and more. Ken also discusses how to get into deep sleep states at night, ORMUS minerals, scalar energy, mechanics of the mind-body connection, and many other advanced natural health topics.