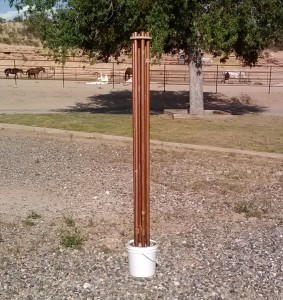 Updated June 23, 2017 – (I changed to Cloud Buster)I was first introduced to Orgonite and this notion of gifting Orgonite to the environment back in 2007.

I had been doing some research related to skin cancer and stumbled across a site http://www.eclinik.net/, where you can make donation to download and read “Toward Healthcare Emancipation”.

In that ebook, there are plans of how to make your own electronic zapper device that would work to eliminate parasites and all sorts of disease being mistreated by our current medical paradigm.

While researching electronic zapper’s I came across Don Croft’s website www.worldwithoutparasites.com and read about the results Don’s clients were having.

I was fascinated with the prospect of using a simple electronic device that runs on a 9volt battery to help keep myself free from parasites (including the medical ones). And eliminate the need for harmful and gut destroying antibiotics and much more.

I went further in my research on Don Croft, and stumbled across information on www.whale.to, www.educate-yourself.org and www.ethericwarriors.com which introduced me to this simple composite called Orgonite.

Don and Carol Croft (and many other etheric warriors) were going on gifting expeditions all over the US and documenting the results.

After reading some rather bizarre stories of gifting Orgonite around cell/death towers, gifting Orgonite to detoxify river’s, streams and ports. They used it to neutralize a huge number of federal letter agency and private contractor weaponized electronic gadgetry too.

I was intrigued and somewhat skeptical with the idea that such a simple to make composite could have such positive effects for our environment. And also reduce or eliminate the effects of electronic attack and mind control electronic devices.

My skepticism started to wane when I continued to read many stories of people from different country’s around the world who are engaged in this Orgonite gifting activity. And were witnessing and documenting the same amazing results.

In July of 2011 I met Rozlyn Reynolds who is a very gifted psychic with super sensitivity to subtle energies. Roz can feel the energy being emitted by everything (no kidding). She spends much of her energy blocking and clearing energy from people and the environment. Roz and I became romantically involved in August 2011 and we are together to this day.

My skepticism about the effects of Orgonite completely disappeared when Roz could confirm the energetic qualities of the first Orgonite devices we made back in July of 2012.

Much of the Orgonite we’ve made has been gifted to the environment, friends, relatives and people in need of protection from harmful EMF in their home and work environments and also demonic, psychic and electronic attack.

Of the 3000+ Orgonite devices we’ve made, the Cloud Buster is the one that excites me most. That particular device (pictured above) wasn’t made exactly to Don’s specifications.

I didn’t have any double terminated (natural points of both ends) clear quartz crystals or the budget to buy the 6 required for a Cloud Buster.

I placed 2 single terminated (natural point on one end) Lemurian clear quartz crystals and 2 small pieces of Citrine quartz pieces in each of the 6 pipes. With the crystal points aimed at the sky.

I custom cut small pieces of water hose and wrapped the crystals to separate and keep the crystals aligned with the 1″ copper pipe.

We added 4 additional clear quartz points, 6 Amethyst and 10 Citrine quartz pieces to the base Orgonite. I poured the fiberglass resin in 32 ounce batches (instead of Don’s recommended 64 ounce batches). Then added the aluminum shaving, spread and tamped it with a wood dowel to eliminate any metal voids in the resin.

I added the base quartz pieces in the mid sections of the base Orgonite first. Then poured the resin and added the shavings. These devices are expensive to make (with the copper pipe extensions – $319.00 out of pocket). So we don’t have any pre-made for immediate delivery.

However if you’re interested in a Cloud Buster built to Don’s exact specifications and with Rozlyn’s additional crystal formulation, follow the link below to go to the order page.

We hope you enjoyed Our Cloud Buster Journey.

Other Articles Of Interest

Category: Orgone Experiences
All Products Are Made By Ed In Cornville Arizona